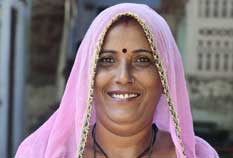 A perfect example of a fun yet power couple, Giriraj & Sugna are proud weavers from Khawarani village in Rajasthan. They both started their weaving journey together 12 years ago, soon after they got married. They are of the same age and complement each other really well. They are parents to two daughters Jiya and Kanak.

Patang ki ChahaGiriraj grew up flying a lot of kites, but despite multiple efforts at getting his daughters interested in the activity, they showed no interest whatsoever. Every year during a festival called ‘Sankranti’, he buys new kites that end up getting wasted as no one flies them in the house. Giriraj says that he misses the thrill and excitement of flying kites like he did during his childhood. Hence, a lot of kites are depicted in this carpet as a silent desire to fly kites again.