The stitches and knots are losing their grip. Once treasured for its innate intricacy, the practice of making rugs by hand has helplessly bowed down to the might of machine-made processes. But women like 40-year-old Laxmi Devi, a carpet weaver, has still a lot to be thankful for.

She has traversed the dark alleys of taboo to follow the trail of light, leading to financial independence and personal empowerment, all because of the setting up of the 17 Sustainable Development Goals (SDGs) by the United Nations General Assembly in September 2015. The company she is employed with, Jaipur Rugs, is one such enterprise that is following the UN’s mandate, making Devi a hero of sorts in her village of Manpura near Jaipur. From being almost destitute to being satisfactorily employed, she earns between `3,000 and `5,000 a month now. She works from 9 am to 5 pm, taking a short one-hour break to cook for her family. “After I joined the company, I started getting timely salaries, which wasn’t the case earlier. The fact that the company had started an Alternative Education Programme to provide functional literacy to artisans and community members, helped a lot. We then educated our children,” she says.

Sitting comfortably on a backless bench with her back pulled up straight, Devi listens carefully to the 30 thought leaders from across the world, who were visiting the Jaipur Rugs showroom on April 26. Even though the discussion was in a language she couldn’t comprehend, she made sure a translator helped her understand what was going on. She was eager to learn about the SDGs and how it demanded the end for discrimination, violence, trafficking, early marriages, genital mutilation and other harmful practices against women and girls.

Out of everything she heard, we saw her eyes lit up on one particular point, and that was the aspect about ensuring women’s full and effective participation and equal opportunities for leadership and in decision making. “Only if more women are given opportunities to prove their value, will the world see their strength,” she says, adding, “Joining hands with private and public stakeholders could help eliminate poverty. We’ve gained a lot of respect by becoming skilled workers. Our market value has also increased and people now look at us with admiration,” she says, teary-eyed. But she clarifies. “These are not tears of sadness. These are tears of hope.” 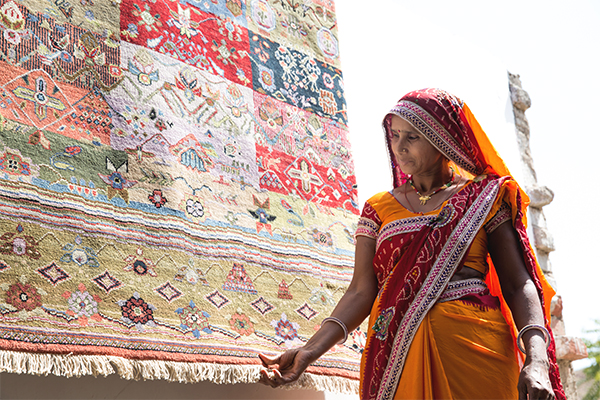