In Rajasthan, the Manchaha Initiative is encouraging weavers to make the loom their window to the world 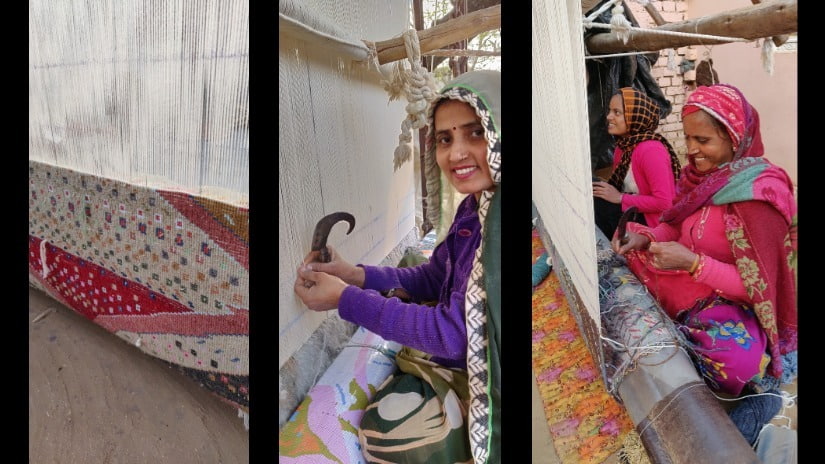 An avid weaver of rugs, 40-something Sajna, a resident of Aspura village — about 70 km from Jaipur — spent most of the day at her loom, after finishing the household chores. She’d keep up a steady rhythm — the clacking of the bars, pulling of yarn and slicing away at the excess threads — till way past sunset; this rhythm was rarely broken, even when she was conversing with neighbours or family.

All this changed when Sajna was diagnosed with cancer and had to stay away from her loom for over four months — longer than she ever had in her weaving career. She also worried of what would happen to her children should anything happen to her.

It was at this time that Jaipur Rugs, the brand Sajna was working with, introduced the “Manchaha Initiative”. Manchaha (which literally translates to ‘from the heart’) gave weavers the freedom to weave, not on the basis of a mapped design as was the norm, but to create something of their own. Sajna’s desire to weave a Manchaha saw her get back on her loom as soon as she was well enough to do so.

She told the story of her journey with cancer through her rug. The design included her interpretation of her scans, the garden in the hospital she was treated at, flowers that were part of her path to recovery; it had the strong finish of a survivor and was titled Sona Bagicha (Golden Garden). For Sajna, her Manchaha rug was an essential part of her recovery, physical and emotional.

This is just one of the many heartwarming stories that have resulted from the Manchaha Initiative, the brainchild of Jaipur Rugs’ design head Kavita Chaudhary. It started as an experiment in which Kavita challenged three weavers from different states and with varying mindsets to sit at the loom and weave something together.

“Here were three men, each of whom thought themselves the best. Each of them began to weave what they felt like, with no cohesive thought at all. They had no friends or family to socialise with at the end of the day but still did not interact,” recalls Kavita. “It was just around Diwali, and the fact that they were away from home that saw two of them break the ice, while the third continued to remain aloof. Finally, the third weaver felt that things may not bode well for him if he did not work as a team member.”

The patterns on the rug the men wove start off as three varying designs, before coming together as one. Named Anthar (Differences), the original rug was archived and Kavita’s team had to map and create it in multiple colours for retail. It went on to receive several international awards and spelt the beginning of the Manchaha initiative and ‘Artist Originals’, Kavita narrates.

Visiting Aspura and meeting the weavers behind these rugs, I saw just how much their looms mean to them. Given pride of place in their courtyards, these looms are kept as spotlessly clean as their homes, their lengths strewn with yarns of various colours. Those who don’t have the space for a loom in their homes can visit the village headquarters, where a large loom is installed and several women work together.

Seated here are Pinky (21) and Anita (who guesses her age to be around 32). I ask them how they were initiated into the art of weaving and Pinky — the more vocal of the two — tells me she learnt it by observing her older sister, and gradually getting hands-on practice. Pinky says that she sits at the loom for a good eight hours or more a day and is happy to have the money come into her account every month, for the work that she has done. Not being literate hasn’t stopped this young woman from making a living and seeking independence.

Anita too is happy to supplement her husband’s income. He works in the paper supplies business, while she has been weaving for 16 years. Her 13-year-old son is getting a good education and Anita says emphatically that everything she is doing is to ensure he does well and secures a good job.

While for Pinky and Anita, weaving has been about financial independence and earning a living, for Prem Devi — a mother-of-three now in her early 30s — the Manchaha Initiative has offered a means to emerge from her shy shell. Known for her high quality weaving, Prem tells me that she was happy at her loom and looking after her family. One day she received a call from the Aspura unit supervisor on her husband’s phone (she didn’t have one of her own, not knowing how to use it), asking her to become a ‘Bunkar Sakhi’ (weaver’s friend) and supervise the work done by weavers allotted to her and also addressing their concerns.

“I was scared when they first told what they wanted me to do. I had hardly stepped out my house and could not speak to anyone, but my husband encouraged me and I decided to give it a go,” Prem says. Today, she knows how to use a phone, speaks up clearly and is diligent about her job. She has split the two villages she handles and all the artisans in such a way that she visits them all twice a week, giving her a Sunday off. (Although she now admits that she enjoys her work so much she doesn’t mind going out on Sundays too.) She walks everywhere. Her own weaving has come to a stop but the feeling of responsibility is immense.

Of the rugs created in this well-oiled system, many have gone on to win international recognition and the creator of the rug has always received her awards in person. Take weaver and designer Dhafali Devi, whose Manchaha designs have seen her to take the stage at the prestigious European Product Design Awards. She shyly brought out all of her awards and showed them to me, while I sipped on some of her wonderfully made ginger tea. “I love making Manchaha rugs because I have so many ideas in my mind and I am able to create all of them on these rugs. It has given me financial security, recognition and has elevated me to an important contributing member of the family,” she says. Her husband nods in agreement, looking on proudly.

The initiative has changed the dynamics of their relationships too. Where women once deferred almost reverentially to their husbands, today, the men in the villages this initiative covers, proudly acknowledge their wives’ achievements and even defer to their leads in rug making when they are working together.

Ask Rudmal and Patasi — a couple that has been weaving together for 27 years — what it’s like working with each other, and they say that they have never had any differences on what shape the design should take, and have never fought over work in all these years!

Manchaha rugs are taken up of one’s own volition and an increasing number of weavers are opting to do so across several villages in Rajasthan as well as other states. The idea with the initiative going forward is to get international designers to work with the artisans to create designs. What’s being woven on these looms isn’t just yarn, but also the hopes, dreams and aspirations of these women.